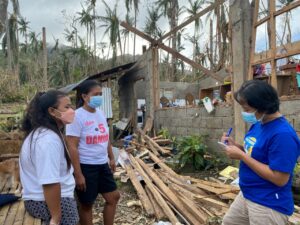 Hundreds of families across the Philippines in desperate need of help in the aftermath of Typhoon Rai will be receiving essential supplies thanks to a grant of £25,000 to Plan International from Jersey Freemasons and other Provinces within the British Isles.

Freemasonry, through the United Grand Lodge of England (UGLE) and Masonic Charitable Foundation (MCF), is responding with Plan International to support affected communities at this critical time. These funds will be used to provide hygiene kits, including soap, shampoo, towels, toothpaste and brushes to 851 families to help them keep clean and healthy in the aftermath of the devastating typhoon.

Winds of up to 120mph, heavy rain and storm surges battered the islands, leaving entire villages submerged in floodwater, trees uprooted from the ground and hundreds of thousands of people seeking shelter. Communication routes, power lines, bridges and roads were also either damaged or blocked with debris, making it difficult for emergency responders to get to the worst hit areas.

Reports have described scenes of ‘complete carnage’, with homes, schools and community buildings throughout the region being levelled to the ground. People affected by the typhoon still require urgent relief and long-term support, such as housing and livelihood assistance.

The grant from Jersey Freemasons comes through the Masonic Charitable Foundation, which is funded by Freemasons, their families and friends, from across the British Isles.