Jersey Freemasons have been honoured by being the first Masonic Province to receive the Lifelites Platinum Partner award which recognises the Province’s past and ongoing commitment to supporting Lifelites at Jersey Hospice Care Children’s unit.

During a recent visit to Lifelites HQ in London, the Provincial Grand Master was presented with the Platinum Partner certificate by Simone Enefer-Doy, Chief Executive of Lifelites. Accompanying the Prov GM were Bros. Colin Whittaker and Robin Lee. 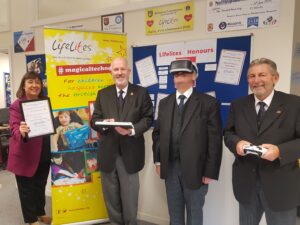